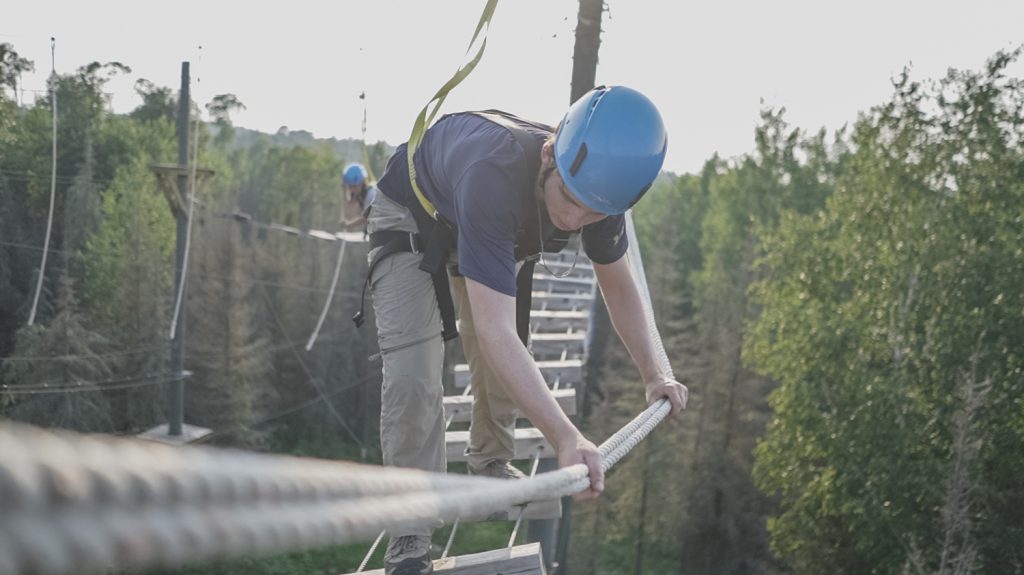 Learning from failure on the high ropes course

“Life, Sweetness, Hope.” This is the University of Notre Dame motto. Life is often sweet for students like Notre Dame’s “Domers,” but sometimes the just deserts are hard-won and living life requires courage. Voyageur Outward Bound School asks students and staff to be brave all the time.

We ask people to do hard things — things they are more than likely to mess up on the first attempt (maybe the second and third attempts too). Our students and staff have all failed in front of other people. Our classroom–the wilderness–is an unreliable and changeable context; the perfect laboratory for failure. The beauty of our work is that we bring all different kinds of people with diverse strengths together to pursue common goals and experience challenge. We invite people to share an adventure that helps them identify internal tenacity.

This summer, I worked with a group of students who have, and will share, plenty of gifts with the world. They are highly accomplished first-year Notre Dame Merit Scholars. These young adults have spent their high school years building non-profits, learning the nuances of geopolitics, or acing AP physics because they plan to be the first woman of color on Mars.

I led seven of these students on a week-long Boundary Waters Canoe Leadership Expedition. My students learned new knots with ease, never hesitated to jump into a team-building exercise, completed tasks with little hesitation and asked questions that reflected their curiosity about our region and their passionate pursuit of knowledge.

“What are all the different trees we are seeing?”

“Can you explain the history behind the Boundary Waters Canoe Area Wilderness Act of 1978?”

“How did the voyageurs interact with the Native American population?”

The Scholars arrived at our wilderness base with a measure of confidence grounded in a track record of demonstrated academic and intellectual success. They not only achieved admission to a highly selective higher education institution, they also secured coveted scholarships based on their achievements, their merit. An internationally renowned university made a big investment in them because of their demonstrated success. Success. But what about their failures? It’s no secret that Outward Bound invites people to fail.

We see failure as an opportunity to learn and to build resilience. So does Notre Dame.

The University of Notre Dame partners with Voyageur Outward Bound School to develop servant leadership and a sense of community for first-year students. Notre Dame recognizes that ethical leadership is developed through empathy and compassion. Our own Executive Director, Jack Lee, is a Domer, and he had the opportunity to return to campus as a speaker for their Ethical Leadership series, kicking of a year of leadership inquiry for scholars.

Jack reminded students that empathy and compassion are fostered by common experience and vulnerability among peers; this leads to compassionate community. Through shared and sometimes challenging experiences, students come to identify a diversity of peer strengths. They find support in their peers and themselves in the face of personal adversity. “There is more in you than you know.”

And there is more in us than we know. As an Instructor, I know my students will fail. It won’t all be high fives and fist pumps. My job is to facilitate failure — to create a safe space where students can fall down, freak out, recover and learn from the experience. Through trying and failing and trying and succeeding, failure becomes an acceptable thing, something that is bound to happen. Failure is something that is so guaranteed, you can embrace it because you know you are going to learn from it. But, learning the fine art of failure is a delicate and long process. It takes time and repeated experiences to demonstrate the power of failure and to see that it can be a healthy facet of life.

On our third morning in the Boundary Waters Canoe Area Wilderness, we encountered some swift water. When I say “swift,” imagine a Class I rapid, relatively smooth, some riffles and occasional obstacles. My fellow Instructor and I immediately saw an opportunity. There was just enough challenge to inspire trepidation, but we knew the challenge didn’t exceed their skills. You could immediately sense the students’ hesitation. Somebody said, “Shouldn’t we just portage this?” They’d mastered portaging to the extent that success was guaranteed, but paddling this water? That presented a risk. It could suck. Bad. Maybe they wouldn’t be able to fight their way upstream.

The first of our three boats moved forward. The crew gave each other a quick nod, paddled forward then dug in. They tried to give each other paddling advice:

J stroke! No C! Back paddle!

The water just pushed them back and it wasn’t clear anyone had heard the shouted advice. You could feel the tension rise after they watched that first boat struggle. I was getting uncomfortable because I had opened the door wide for failure and my students knew it. My secret was out. One of my students erupted:

What are you thinking? Why would we do this? You guys think you are teaching us some great lesson, well I know what you are doing!

I tried to summon up some eloquent response, but then I remembered:  This is Outward Bound.

Outward Bound means that we are going to do hard things. Sometimes it’s going to work out and sometimes it isn’t. There is no big secret here. It’s all about how we respond, how we cope. So that’s what I told them. 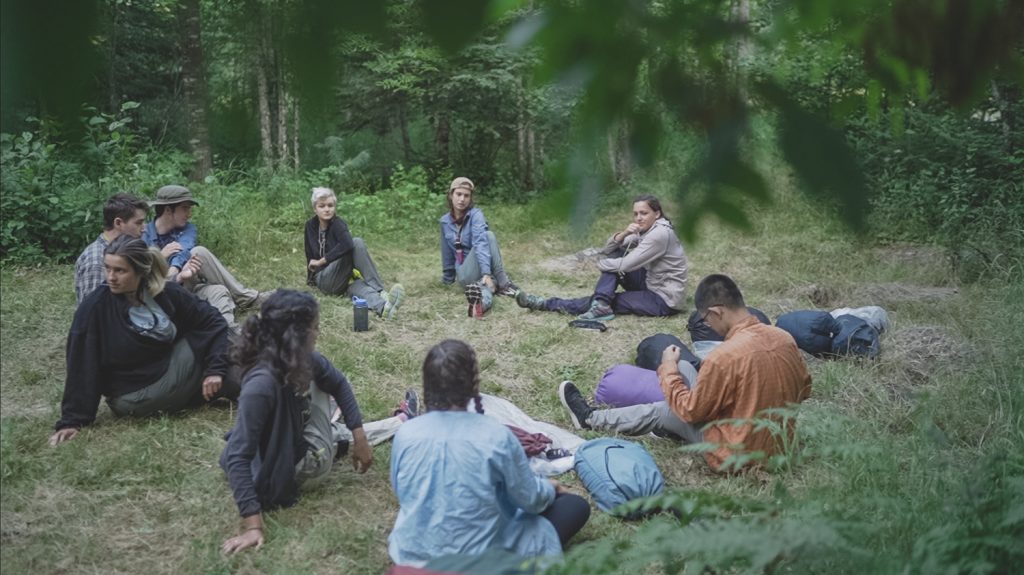 Preparing for challenge with an early morning camp stretch

They gave it another shot. The second time around they just washed back. On the third attempt, despite almost dumping, they finally made it. Boat two moved into position. This time, students looked on from the other boats, dialed in, anticipating the challenge and cheering them on. It looked like boat two was going to make it, but suddenly the stern beached on a rock and they had to back off and try again. One more time and they made it. It took boat three four tries and a furious exchange of harsh words, and then they too bested the current. Three boats, nine tries.

As we paddled on, I surveyed the crew. Not a lot of smiles. No laughter. Faces registered fatigue and broadcasted a dismal sense of failure. So we pulled off the water and pulled out a snack. I asked a simple question:  How’s everyone feeling? This is something we ask A LOT on an Outward Bound course. Here’s what I heard:

My co-instructor and I wanted them to paddle against that current. We chose the harder path, knowing it would challenge them. We wanted to give them an opportunity to exercise courage in the face of potential failure. When a group takes on a challenge together, it can lead to increased vulnerability, which can bond a group and lead to the discovery of personal and peer strengths. More empathy, more understanding, more support, more resilience — stronger community. 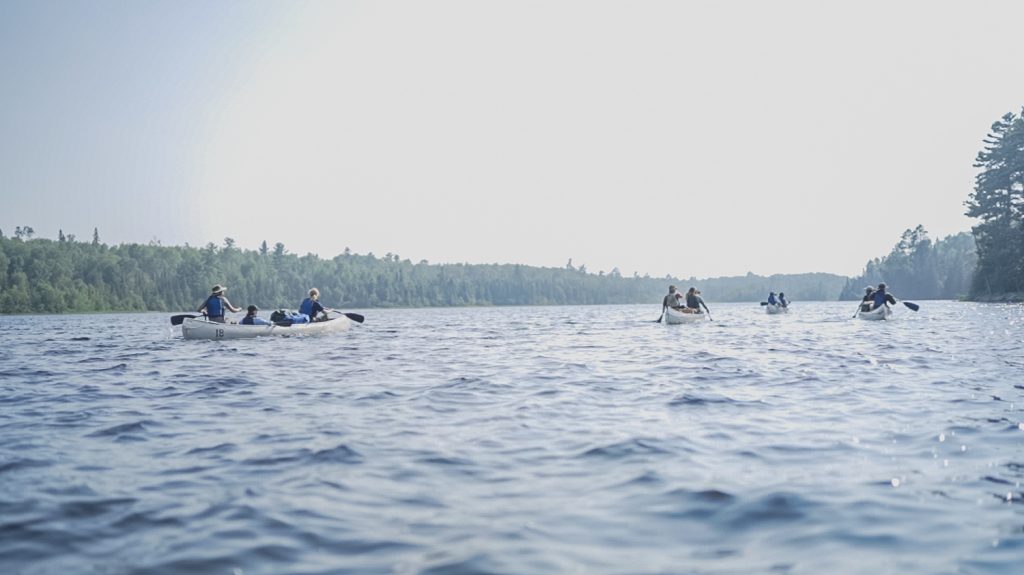 We sat on the shore and talked about failure. At first, we danced around the topic, students cited how they had ultimately succeeded, that is was not a big deal because they had made it. Reflective conversations can be contrived; students have to truly discover impact on their own. Sometimes they do make the connection on course, and sometimes it happens years later.

We asked them to define failure. One student said failure was, “messing up in its entirety.” Other students described how they had spent most of their lives avoiding failure in order to meet the goals, objectives, and expectations laid out for them.

A student noted, “You don’t get to Notre Dame by failing.”

The conversation circled on this idea. Vulnerability increased as students shared moments of failure they’d been too afraid to admit earlier. They talked about the shame they felt, how admitting failure was like owning up to a shortcoming you weren’t supposed to have.

The conversation continued, even after we got back in our boats. Students acknowledged that failure is inevitable and even necessary. If you don’t fail, you don’t learn. Students learned to paddle upstream by trying, failing and tweaking. It took some time, but their experience helped them adjust their approach to the challenge and, eventually, they succeeded.

Remember, these students are viewed as leaders in their communities and are being asked to step into leadership at a prestigious university. They all had a pretty good idea of what they are supposed to get out of an Outward Bound course, but the Scholars seemed surprised that the experience was actually powerful. The student who erupted earlier, now quietly asked:

We paddled on, that question skimming the water with us.

That night in camp, we sat around the fire together. Another student spoke up, “Maybe if we had spoken the truth at the moment, about how hard it was to paddle upstream, we wouldn’t have been so miserable afterward. What if we had asked for help right away? Maybe if we had not been so blinded by frustration at each other and worked together, we would have ultimately felt less defeated.” 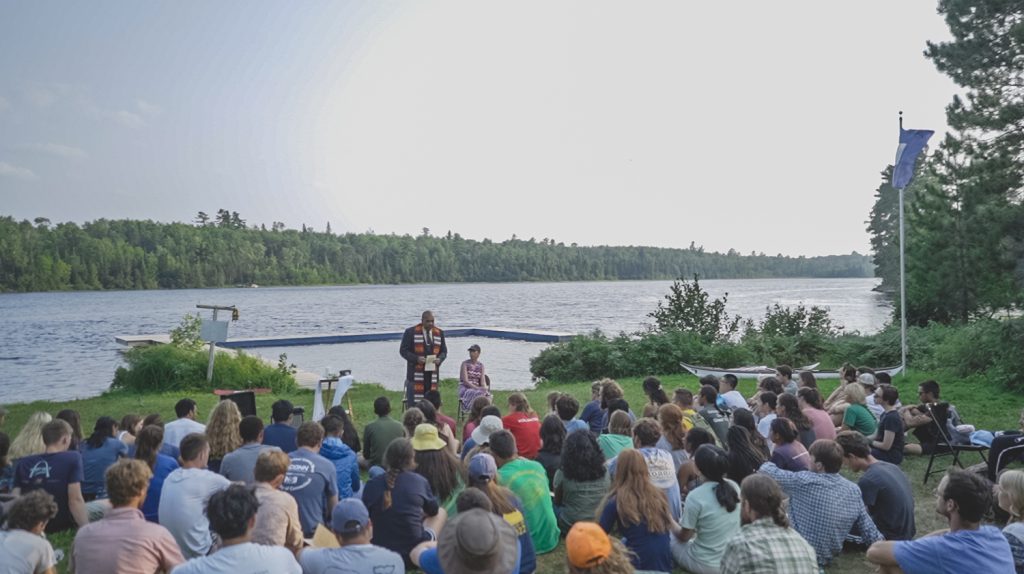 Working with Notre Dame scholars reminds me that even the most talented, driven, passionate people routinely experience failure. Thankfully, Outward Bound gives us all an excellent opportunity to practice the fine art of failing well.

If you would like to learn more about the Notre Dame student experience, you should check out this amazing video by Vaibhav Mopidevi, aka, Mopi.

Mopi is a first-year student from Bangalore. Mopi almost didn’t make it to Minnesota for the trip. Right before he was due to depart, his grandfather took ill and was hospitalized. Standing at his grandfather’s bedside, Mopi declared he wasn’t going to leave. His grandfather insisted that he get on the plane and begin his big adventure. Mopi said, “Grandpa, I’m going to make you proud” to which his grandfather replied, “No, Mopi, make India proud.” 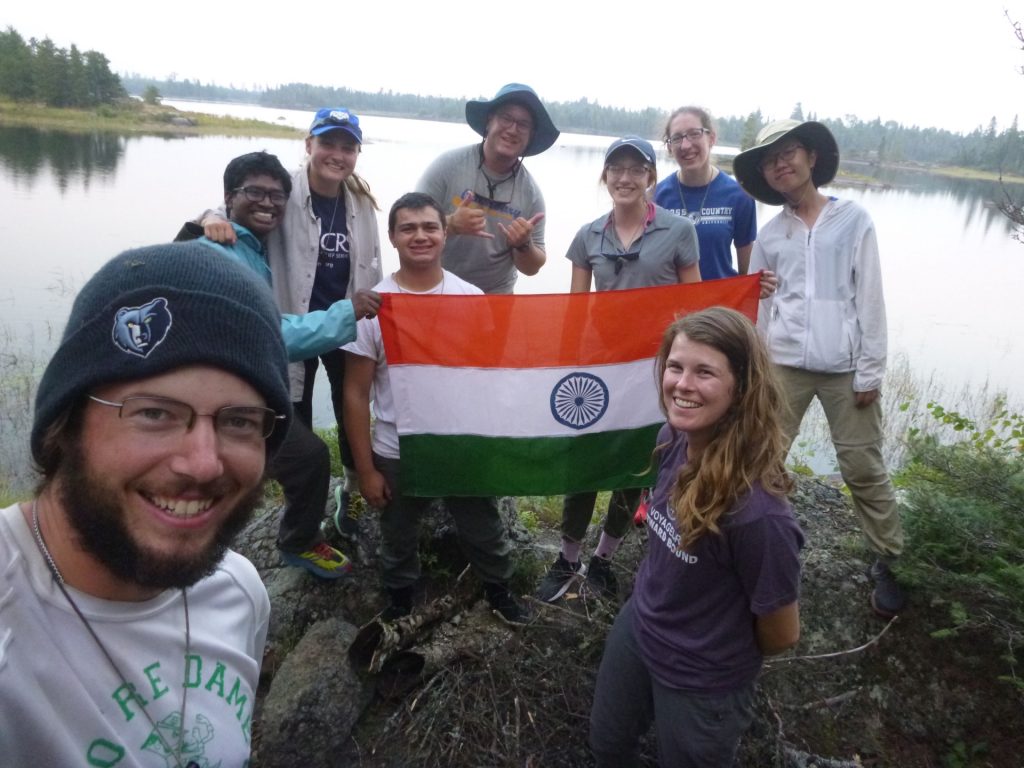 As soon as Mopi and the other Notre Dame scholars got off the plane in Duluth, Mopi lobbied to go to Target and get a GoPro — this involved some wire transfer shenanigans and last minute Ubers between Outback Steakhouse and Target. In the end, Mopi went on course with us and carried the Indian flag throughout the entire expedition. He made this film for his grandpa.

Mopi, is so Outward Bound, it hurts!

Katherine Davis is the Development Officer at the Voyageur Outward Bound School. Previously she did communication strategy consulting, non-profit development and was busy completing her master's degree. Her VOBS story began as a student when her life was changed by challenge and discovery this led her to become a field instructor with us. When not rallying others around the mission of VOBS she is busy keeping her stuff organized, waiting for the next snow, digging into a book and of course, heading outside!

View other posts by Katherine Davis
Posted In :
VOBS staff

Stay informed on Voyageur Outward Bound School news and updates!
Please fill out the form below to begin receiving our email newsletter.

PART OF THE NATIONAL NETWORK OF OUTWARD BOUND SCHOOLS IN THE U.S.